Posted on January 6, 2013 by henriettegyland

There comes a time after Christmas when the decorations, which were put up with anticipation and enthusiasm the month before, begin to look a little out of place, a little messy perhaps. The 12th day of Christmas, or more specifically Epiphany on the 6th of January, is the day to traditionally take them down again, and I stick to this quite rigorously because I think it’s a lovely tradition.

But before I take them down, I’d like to share some of my favourite ones with you.

Our house “nisse” looks sweet but…

This little chap is what we call a “nisse” in Danish (or “tomte” in Swedish), and he’s a cross between a good luck charm for the family home/farm and a wicked mischief-maker. If he’s not treated well, in other words if he doesn’t get his bowl of warm rice porridge with a dollop of melted butter on Christmas Eve, he’ll spend the rest of the year teasing you. In the olden days the nisse was blamed for anything from a bad harvest to a death in the family, so it really pays to make a bit of extra porridge!

This golden snowflake is one of a set of five very delicate decorations, so delicate they are stored in a box for protection. My parents bought this set from Unicef and gave it to me the first year we celebrated Christmas in our own home, and we have treasured them ever since. 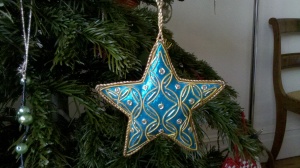 A soft, padded star made from Indian silk and gold braiding. I bought it as a set of four from Traidcraft when my daughter was two years old, and they’re still going strong.

This wattle and silver wreath normally graces our front door, but it rained so much this Christmas, that we chose to put it on a wall instead!

This golden-plated decoration depicting a ram came from the Danish designer of jewellery and tableware, Georg Jensen. I inherited it from my grandmother who would often hang hers from a candle holder if she didn’t have a tree.

Guaranteed to liven up any tree

This shiny disco ball came in a box of four from Cargo Homestore a few years back, and they seriously liven up a Christmas tree because of the way the lights are reflected in all the tiny little mirrors.

A most treasured possession

My daughter made this wreath in primary school from salt dough, and then painted it. It is one of my best treasures.

Do you have a favourite Christmas decoration, and what makes it special to you?